Showing posts from November, 2015
Show all

Blog Special Edition: Today's guest blog is authored by John Kemp, President and CEO of the Viscardi Center , located in Albertson, New York.  I invited John to share his open letter here, at View From the Chair, to Mr. Donald Trump, regarding comments directed at a reporter covering a political campaign event hosted by the presidential candidate. The reporter, Serge Kovaleski, is disabled.  I currently serve as a board member of Abilities, Inc., at the Viscardi Center, which is part of the Center's network of non-profit organizations that educates, employs and empowers children and adults with disabilities. Jim Sinocchi     John D. Kemp Oops! He’s done it again. I n about as innocent a fashion as a young woman’s romantic actions seemed in this pop song, climbing the music charts at about the same time Donald Trump was first being covered by New York Times reporter, Serge Kovaleski, Trump mocked the journalist’s disability. You see, Trump’s words and act
Post a Comment
Read more 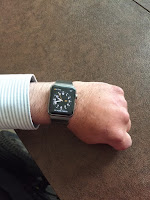 My wife bought the Apple Watch for me on my 60th birthday. The fact that I have a high-tech device, literally at my "paralyzed fingertips" to do basic social media activities is a 21st century breakthrough for me! More than that, the Apple Watch provides me with a sense of security and independence I never had until now - - in more than 34 years of paralysis - - 35 next month. With the watch on my wrist I no longer have to wear a "lanyard," affixed to my iPhone 6 , and around my neck. I don't worry about the dangling phone getting caught on the edge of my dining room table or falling into my soup dish anymore. When the phone rings I can use my paralyzed finger to answer it and speak normally. I can send messages, call my family, friends and other business and medical professionals listed in my iPhone. Apple Watch on my paralyzed closed hand . I can send or answer a message with the touch of my finger or answer with several preset messages usin
Post a Comment
Read more

You never know what a kid will say or do next

Déjà Vu : This column was originally published in the Journal-News, a newspaper distributed in Rockland County, New York, August 12, 1991 . I'm re-publishing this column as part of my online blog. I still believe the message is appropriate today and is an example of the activities many of us with disabilities can enjoy in the United States, and perhaps around the world. Photos may be added to this posting from my collection or the web, as noted. Some of the organizations and programs mentioned here may have changed or no longer exist in New York State as of this writing.  I hope you find this column helpful and informative. It's been fun watching the kids grow up. As a first-time father, the last two years have been especially enjoyable because I've watched my son, James RIchard (J.R.), grow out of infancy since he was born in September 1989. Yes, I know, we're approaching the "terrible twos." And yes, I'm not prepared for it. Nonetheles
Post a Comment
Read more
More posts