Showing posts from July, 2015
Show all

Life as a Disabled Retiree: What's Next? 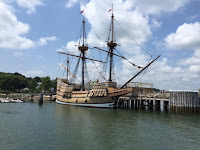 Many changes have occurred in the past year since I last wrote here. First, my wife and I became grandparents of two little darling girls - - Natalie and Julia - - born about a year apart. Second, we moved out of New York State and became residents of Massachusetts. And third, after nearly 40 years of full-time work at one company, this C5-C6 quadriplegic blogger decided to take “early” retirement and end my career at a prominent high-tech company. We chose to move to Massachusetts because we’re closer to our daughter and her family, and it’s less expensive than living in New York. The quality of life is also better for us - - we’re just a stone’s throw away by car from Cape Cod and its scenic ocean views, which is south of our home.   MayFlower II at Plymouth Bay, Mass. And, just North of us, is the vibrant City of Boston , which is a 45-minute drive on good traffic days. I ended my corporate career in February 2015, and have been thinking quite a bit about my life as a hu
Post a Comment
Read more
More posts